In those years, Mr. Haydar ŞAHİN started his business in a lathing and leveling workshop. As Formül Kalıp, the first foundations were laid with the identity of a mold maker and R&D conductor. Formül was established as a company in 1990 and continued its activities in the field of small scale design, R&D, mold making and lathing, milling (machining) in the first years of its establishment. Also in 2017, Formül is the first company to obtain the AEO (Authorized Economic Operator Certificate) in other words the European Union Free Movement Certificate in the plastic sector. Formül registered its own brand and started domestic sales. In the following period, aside from the domestic sales, the company turned its steps towards exporting by obtaining the patent rights of Aquapa, Aquapipe, Aquaplast and Foraqua brands. Formül was the first company to establish its own factory in those years, a factory which could meet the manufacturing needs of the company for metal pivoting group or metal fittings in product or semi-product classes. Formül has realized various designs and projects with its professional team capable of R&D (KNOW-HOW) and having its own machinery parkour. These are the years in which Formül has nearly tripled its production capacity and turnover in every field.

Assembly and packaging process were automatized.

The company sent its products to world markets by means of franchises it has created in over 50 countries. Since 2014, the company managed to find a place in the list of “Top 1000 Exporters” in which Turkey Exporters Assembly announced the companies which exported the most in the country. 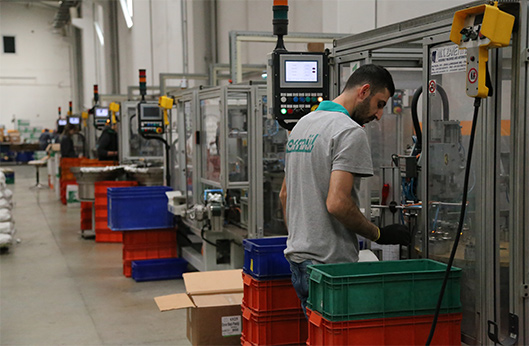 Formül constructed the factory buildings designed by the company in Çerkezköy / Veliköy Organized Industrial Zone, which provide renewable energy based on its own requirements and renewed its machines. Formül organized itself to meet the demand in Turkey and to increase the domestic market share and obtained a part in the market.

The mobile system (PE-RT) pipes, PVC wastewater pipes and fittings which were the 2 different product groups required by the sector, were incorporated into the company. Formül is the only company in the industry that has multi-eyed mold technology and product range related to it.

Formül is the company which exports the most in the PPR-C fittings product group.

Formül has an understanding for shipping which fully meets the customer expectations.